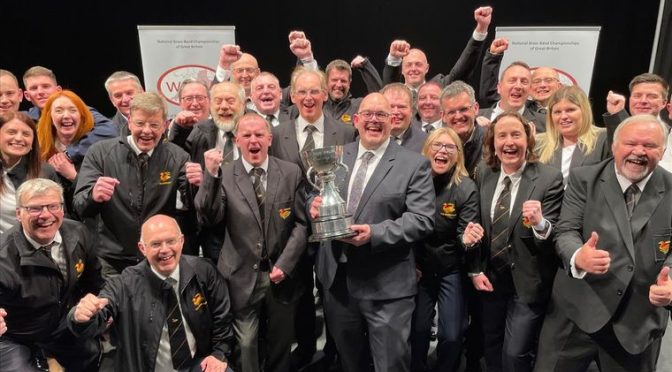 The Band is absolutely delighted to be crowned West of England Champions of the Championship Section at Cheltenham on Sunday 3rd April 2022. We were delighted with our performance of Wilfred Heatons Contest Music . This was the result of the leadership and Musical Direction of our M.D. Glyn Williams . This comes off a 2 year Enforced hiatus from major competition and also off a winning performance led by Glyn at the recent Wychavon Entertainment Contest October 2021.

As our Chairman Shaun Mundy stated.

“West of England Champions for the first time since 1981. Thanks to the band of today and everyone associated with the band through those years! Also, well done to all the bands today after a rough couple of years. We look forward to representing the West of England and the village of Aldbourne at the Royal Albert Hall in October!”

“Deftly led by Glyn Williams over the treacherous hurdles of ‘Contest Music’, it was the Wiltshire band’s first top-flight Area victory since their sole success in 1981, although it was by no means a lucky outside bet come good”

The Band now looks forward to a busy Spring and Summer season of Concerts and looks forward to preparing itself for the British Open at the Birmingham Symphony Hall on September 10th 2022, closely followed by the Royal Albert Hall National Finals on October 15th 2022 ….we cannot wait !

With our Musical Director, Glyn Williams, we are currently meeting a minimum of once a week on Zoom to prepare our online recordings and competitions.

We aim to return to full rehearsals as soon as the rules allow, and once our players feel safe to do so.

Whilst the calendar is currently understandably quiet, we have a very active annual set of events and will be performing at the next British Open whenever the contest is able to be held.

If you are keen to join a committed community band, please contact our Chairman Ian Keene on the email or phone number listed below.

Hello everyone hope you are all keeping well. We wanted to update you on forthcoming concerts over the next month or so. Obviously with the Covid-19 situation moving swiftly and following closely government guidance over social distancing it is with great sadness the following concerts are being cancelled or postponed.

7. 11th July Phoenix Choir Joint Concert – 75th John Rutter Anniversary Concert – Postponed 2021
We are however going to look to start posting for your enjoyment on our Social Media presence recording of recent concerts over the last 6 months so please keep checking in. Be safe be well and once we get through this current chapter in all our lives we look forward as a Band to be back entertaining you all. #Aldbourneband #Dabchicks

Wishing all our friends and Supporters and wider Banding family a fabulous Happy New Year! We look forward with excitement and hard work to build on the achievements of last year! We feel blessed as we move forward into 2020 with a full and happy, settled and committed Band. We give thanks to Glyn Williams for the inspirational and musical excellence and guidance over the last two years and look forward to working hard with him through 2020. We also look forward to working with some amazing conductors over the forthcoming months and experience some new musical adventures. We will forever remain though true to our roots of being the Subscription Village Band.You will find us very much at the center of the Village artistic and musical activities… the British Open dates fall this year so we WILL be marching in the carnival 🙂. Bring on 2020 ! #dabchicks #Aldbourneband 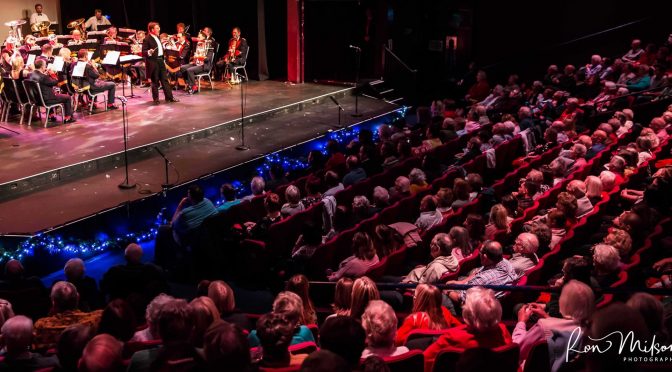 Aldbourne band has been busy since the National Finals in October focusing on concerts and the run up to Christmas.

At the start of November we celebrated the 10th Anniversary of the Friends of Aldbourne Band with a concert composed entirely of pieces picked by our supporters. It was a great success and the band really enjoyed playing such a varied programme, often re-visiting music many of us had not played for years!
Last weekend (24th of November) we kicked off our very busy Christmas Schedule in the usual showbiz style by once again supporting Sheila Howard and the Kentwood Show Choir at their Annual Christmas Cracker Concert at the Wyvern Theatre in Swindon. As always, we played to a packed audience and really set everyone up for the Christmas season.

Looking ahead, Aldbourne has a very busy schedule of even more Christmas Concerts, starting this Sunday (December 1st) where we are once again very much looking forward to playing carols at the Light up a Life service at the Prospect Hospice in Wroughton. On the 6th of December we shall be in Chiseldon at the Church of the Holy Cross for their annual Christmas concert, and on the 7th of December will be guests of the Swindon Choral Society at their Christmas concert in Christ Church, Swindon.
We shall be holding our own Christmas Concert on the 14th of December in St Michael’s Church, Aldbourne, and are especially looking forward to once again be playing at the BBC Wiltshire Carol Concert on the 15th of December in Salisbury Cathedral. In addition to all this we also have lots of carolling outside supermarkets and around the village, and not to forget, will be up at 4am on Christmas Morning to wake up the village!

Please see below for the full list of our forthcoming engagements into 2020.

Wishing you a Happy Banding and a very Happy Christmas, one and all!

Aldbourne band were once again delighted to be guests of the Immanuel United Reformed Church in Swindon at their annual concert, continuing an unbroken trend since 1963!  Performing to a packed audience, the band shared the concert with the excellent Immanuel Church choir and delivered an exciting and entertaining programme, starting 2019 as they mean to go on.

The band’s musical director, Glyn Williams, chose a varied programme of popular music from the high-octane John William’s Star Wars and Indiana Jones and the Temple of Doom, to the chilled Duke Ellington’s Mood Indigo.  Many of the band’s excellent soloists were given a chance to shine in pieces like ‘La Fiesta’ and Billy Joel’s ‘Lullaby’ and principal cornet Richard Hughes once again wowed us all with his spine-tingling rendition of ‘Born on the 4th of July’.  Inspired by Glyn’s powerful baritone voice, the band also treated the audience to a rousing rendition of The Beatles’ Sergeant Pepper’s Lonely Hearts Club band, complete with singing!  The band was thrilled to finish the first half of the concert with a joint item with the Reverend Geoff Gleed, Choir Master and Organist of Immanuel URC, leading the band on the organ in the Finale from Camille Saint-Seans’ Organ Symphony.

As usual the church choir thoroughly entertained the audience and the band, especially with their little ditty about the band’s success to the tune of All things bright and beautiful and He who would valiant be!  Aldbourne rounded off the very successful concert with Philip Harper’s tribute to Roald Dahl “The World’s Greatest Storyteller” and with an encore of Festive Overture.

The concert featured on ‘A Touch of Brass’ on Swindon 105.5 FM on Sunday night, and we thank Martin Upfold for the recording.

The Band now looks forward to the 2nd of February where they will be performing at Dorchester Abbey with the Reading Phoenix Choir.