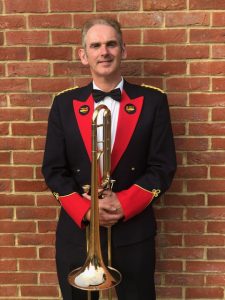 Robert started playing trombone at the age of 5. Coming from a musical family this “seemed the natural thing to do”. His grandfather was Band Sergeant of the 1st Battalion Black watch before becoming Bandmaster of the Royal Inniskilling Fusiliers. His father was a bandsman with the same regiment before attending Kneller Hall and working as Fanfare trumpeter player.

Robert first joined the Swindon Youth Musicians, and British Rail Junior band, graduating to the senior bands as a teenager, plus the Swindon Big band. After returning from University, he resumed regular band activities, becoming principal trombone with Swindon Concert Brass, Corsham, Aldbourne and Kidlington Concert Brass. He recently spent 8 years as principal trombone Flowers Band from 2008 from 2016, during which time the band reached No.5 in Worldwide rankings. Recent musical highlights include 9 consecutive appearances at the National Championships, recordings for BBC, a runner’s up slot at the National Championships with Tredegar, a Welsh Areas win with Cory, finishing on the podium at the British Open with Flowers, and multiple wins at the West of England, French Open and Butlins Mineworkers championships with Flowers.

Robert studied with David Whitson who guided him to ARCM and ATCL performance diplomas. He is current ODDBA Senior slow melody and solo champion. He has regularly performed solo works at concerts and contests and has been featured as a soloist of CD’s from Flowers and Aldbourne bands.

Robert is principal trombone with the Oxford Symphony Orchestra and also performs with several other orchestras in the Swindon and Oxford area. 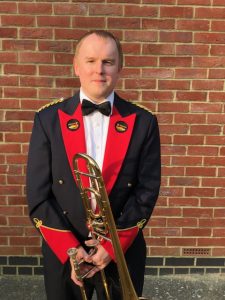 Richard joined Aldbourne Band in 2016, after moving back to the UK from Switzerland. Originally from Yorkshire, he started playing cornet at the age of 6, with his family at the local Slaithwaite Band. From the ages of 9 – 12 he was a student of the prestigious Chethams school of Music in Manchester, performing at events around the country, and attending courses with the National Youth Orchestra. But at the age of 13 Richard made the switch to trombone, beginning with the Huddersfield Youth Brass, and eventually, Huddersfield Brass ensemble, and has never looked back. He gained his first taste of Championship section banding whilst at university, with the Haydock Band in St Helens. After completing his studies he returned to his Yorkshire roots, and was Solo Trombone with the Yorkshire Imperial Urquart Travel Band (Yorkshire Imps) for 7 years, before moving to Rothwell Temperance Band. He has performed at the British Open, Spring Festival, Scottish Open, The Sage and concert venues across the UK, including a victory with Rothwell Temperance at the Grand Shield in 2015. Having moved abroad with work in 2015, he spent 13 months playing with Brass Band Solothurn in the Bern region of Switzerland, before returning to the UK and moving down south. A graduate in Genetics, Richard now works with medical device regulations, enjoys swimming, and football, and also plays with local orchestras, big bands, and wind band.

Craig started his brass playing career aged 7 with a short 2 week stint on cornet.  Having quickly recognised his error he moved to trombone and has played bass trombone ever since.  His early playing years were spent in the local Salvation Army Junior Band and school orchestra both of which were conducted by his dad.  The 70 strong orchestra undertook many UK engagements and european tours including an appearance at the Royal Festival Hall in the music for youth competition.  This proved a valuable experience for his brass band contesting career which began in 1991 aged 15 with the Enderby band in Leicester.  He spent 3 years there before taking a sabbatical from playing whilst at university.  Following university Craig returned to the Enderby band before moving to Swindon with work in 2001.  He went on to play with Swindon Pegasus Brass before moving to Aldbourne in 2013 and a memorable first contest finishing 3rd at the Grand Shield in Blackpool, followed by a first place at the  South West Brass Band Association contest in Torquay.

Benedict started playing trombone when he was 8 at school in Aldbourne, and joined the newly founded Aldbourne Training Band a year later in 2011. He has played trombone ever since, eventually progressing to join the senior band in 2017. As well as playing in Aldbourne Band and Aldbourne Youth Band, Benedict has played in the National Scout and Guide Symphony Orchestra for 2 courses. He is currently studying at St John’s school in Marlborough and also plays the piano.