Mark started his Brass playing on  trumpet at school (it looked easier to carry than a trombone) .  Mark progressed steadily which then saw him joining  the Godalming youth band and then the senior band, progressing from reserve third cornet(!) through the cornet section onto Principal cornet. Mark was a founder member of Friary Guildford band in 1983 and  played with Jayess Queensbury band in the late 80’s whilst at University in Bradford. Mark Returned to Friary in 1990 where Marks spent much of his time  on Principal cornet. ,Mark moved to Flugel in 2003. After 29 years at  Friary Mark moved to Sandhurst Silver before join

To be Announced (Solo Horn) 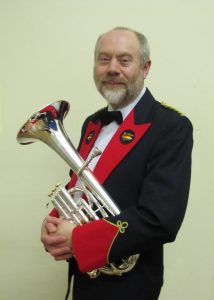 Tim’s  banding life goes all the way back to 1967 when his dad started teaching Tim cornet, ready to join the Ramsbury Methodist Silver Band as it was back then, which was a big part of Tim’s Dad life. In fact, he was a pretty decent cornet player himself and even helped out Aldbourne on the odd occasion . So Tim’s association with Aldbourne Dabchicks  goes back a long way!

Tim joined Aldbourne in 1981 and his first ever contest with the band was on 2nd Horn playing Blitz at the Albert Hall. Quite a jump in playing standards and commitment but something Tim was  so glad to have been able to do. Tim  progressed through the horn section and ended up on Solo Horn, a position he held for many years until taking a break in the late 1990s to spend more time with my family.

In 2006 He was asked to help out on a CD the band was recording, Tim was at that time playing baritone for another band together with Matt, his son, who had taken up Euphonium. Tim and Matt were then asked to help out with the Evelyn Glennie concert at the Colston Hall later that year. The temptation to rejoin the band was too much to resist and both Tim and Matt re-joined soon after the concert in a period which was challenging for the band. Thankfully the Bands strength and teamwork pulled them through  that turbulent time and Tim found himself back on Solo Horn again where, despite some excursions onto euphonium, baritone and Eb bass, always seems to draw him back ! 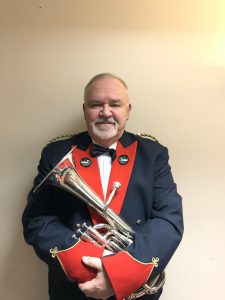 Dave started playing in 1968 when his best mate told him if he joined the school band he would get out of PE. Gullibly accepting this bribe Dave started on Trombone but as the school had a surfeit of trombones and no horns, was pushed to the dark side.

He progressed via the Preston Youth Band and became principal Horn with the Lancashire Youth Band.

In 1975 Dave was asked to join the Band of The Lancashire Constabulary which he was pleased to do. He was duly informed he also had to become a Police Officer….  which he did for 30 years retiring as an Inspector in 2005.

Dave spent a 15 years stint with the famous Besses o’ th’ Barn Band and relocated, on retirement, to the South West in 2006. He has since played with The Flowers Band, Brunel Brass and Aldbourne.

Having played in over 20 British Opens he lists his greatest achievement of having won the Grand Shield 3 times, playing different instruments  at each occasion