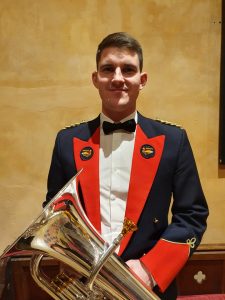 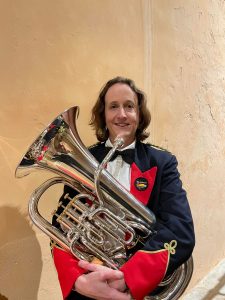 Jo Ainsworth started playing the baritone when her family moved to the Forest of Dean in Gloucestershire when she was 7 and her whole family joined their local Parkend Silver Band. Jo moved onto Euphonium and stayed playing with brass bands in Gloucestershire until she moved away for university. Within that time she met her now husband who plays the Bb tuba. On returning to the area after university Jo joined 3rd section Pillowell Silver Band and then moved to championship section Lydbrook Band on 2nd Euphonium in 2010 and moved to Solo Euphonium a few years later. Her husband joined Lydbrook on Tuba and they enjoyed many tours to Barcelona, Los Alcazaras and Poland, introducing brass music to a new audience. Jo was heavily involved in the Lydbrook band committee helping to organise the band tours, large concerts and fundraising for the band. It was a hard decision to leave Lydbrook Band in 2021 but Jo wanted to take her playing to the next level and looks forward to playing with Aldbourne in their concerts and top level contesting. 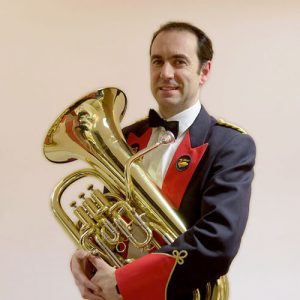 Ed Latham joined Aldbourne Band in 2010 having moved into the area from Norfolk. He started playing cornet at age 8 with his local school band but upon taking lessons with local cornetist Bob Baggot started on 3rd cornet with Coventry School of Music Band, then in the championship section, at age 13. Over the next few years he moved to 2nd Horn, 2nd Euphonium and then on to 1st Baritone with Coventry. Ed joined the National Youth Brass Band of Great Britain aged 17 and became principal baritone for 3 courses. Having met Bob Childs through the NYBBGB he joined IMI Yorkshire Imperial Band, then one of the country’s top bands, whilst studying engineering at Leeds University. The highlight of this time was playing 1st baritone in their Yorkshire Area win of 1993.

Following a move back down south Ed played solo euphonium for his old band in Coventry for a couple of years and then a short spell on 1st baritone with GUS Band before moving to 2nd Euphonium with Redbridge Brass whilst working in London. 10 enjoyable years were spent with Redbridge winning multiple Area contests and appearances at the National finals in the Albert Hall.

Whilst with Redbridge Ed met his wife, Kathy and they moved to Norfolk. After a short stint on solo Euphonium with Norfolk Wherry Brass the family moved out to Adelaide, South Australia to spend a couple of years with Kathy’s family. During this time Ed played with Salisbury City Band and also attained the accolade of ‘Champion Euphonium of South Australia 2009’.

On moving back to England in 2010 Ed and his family relocated to Wiltshire to ‘settle down’ and bring up their two children Hayley and Peter.

When not practising Ed enjoys DIY projects and tinkering in his garage. 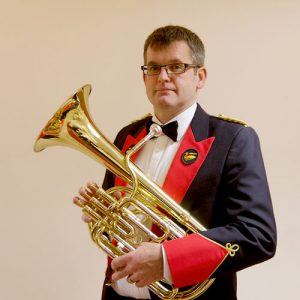 Andy started playing Euphonium at 12 years old with Hungerford Town Band. He progressed quickly and at the age of 16 joined the Grenadier Guards Band on Euphonium and Cello for several years.  He experienced a wide range of musical experiences which really formed the core of his musical professionalism. On leaving the Grenadier Guards Andys music making took a back seat whilst he built up his Garage Business in Hungerford and focussed on bringing up his family. Andy returned to Banding once again some years ago with Hungerford and then moved to Aldbourne band on Baritone. He has built out a very strong reputation as a fine exponent of Baritone playing. 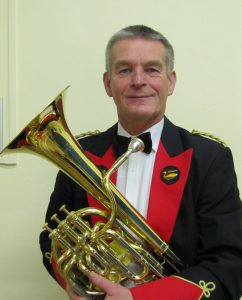 Ian first played on the stage for Aldbourne at the age of 8. Son of Don a former Principle cornet player and conductor of the band, Ian played solo Euphonium at Aldbourne for many years sharing in the success of Shining River at the Colston Hall and appearing for Blitz at the Albert Hall. As a young soloist Ian was the runner up at the Pontins British young brass soloist competition in the late 70s.

Having taken a 15 year sabbatical Ian has recently returned to playing in brass bands. He works in the computer industry and can be found occasionally playing sax solos in a corner of a pub near you! 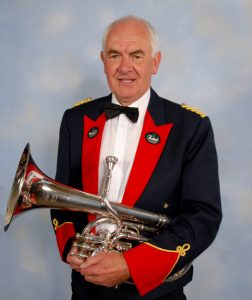 Lionel has been with the Band since around 1957 and currently plays on baritone. He is married to Sue who is a keen supporter of the Band, and they have two sons, one of whom also plays with the Band on percussion. Lionel is also the longest playing current member of the Band with over 50 years of playing experience.

Other interests include tennis, cycling and walking and Li can often be seen pounding the roads around Ramsbury!