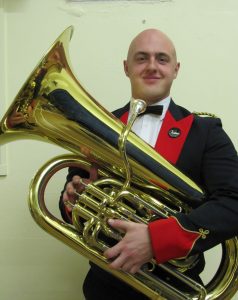 Kieran Bird started playing the Eb Bass with Swindon Gorse Hill Salvation Army at the age of 7 (When the instrument was still bigger than him!) As member of neighbouring band Brunel Brass for over 10 years, Kieran enjoyed great success winning the 4th section and progressing all the way up to the championship section in a very short space of time. He then decided to join the Army as a musician in 2014 and was assigned to the Band of the Royal Corps of Signals, where he still is today. After helping out the band on a few contests, Kieran decided to join full time in 2018 after the Triumph of Blackpool and is looking forward to progressing with the band, competing at major contests. In his spare time, Kieran enjoys keeping fit by going to the gym and swimming. 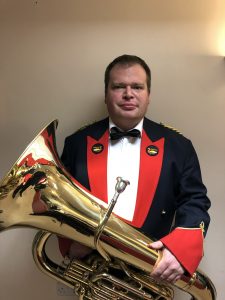 David started playing at the age of 10, when his Dad took him along to an open morning and training band that was being set up by Wotton under Edge Silver Band. David was taught by various
members of the band before joining the main band on 2nd Baritone in October 1996. After 3 years, David fancied a new challenge and moved on to Eb bass and hasn’t looked back since!
Over the years David has been fortunate enough to have played with many bands around the South of England and Wales, including Wotton, Egham, Bournemouth, Jaguar Land Rover, Chichester and
Llwydcoed. Over the years, highlights have included winning the Senior Cup with JLR and winning the Welsh league title with Llwydcoed three times, amongst other things.
In August 2008, David joined the Army and has completed tours to Australia, Japan, Pakistan, Kenya, Washington DC, the Falkland Islands and various countries around Europe, as well as playing at a
couple of trooping the colours and fa cup finals in London.
David is absolutely delighted to have joined Aldbourne in September 2019 and has completed two life long ambitious of playing at the British Open in Birmingham and the National Finals in London. 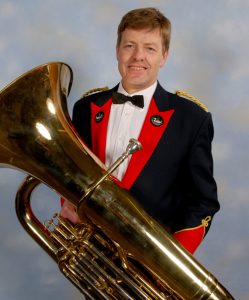 Having picked up a bugle in the Boys Brigade I was soon playing a trumpet with Cricklade Band and Ferndale School, through which I joined the Aldbourne junior band on cornet under the wing of Don Keene in 1975. Although playing with the main band, I made the full time commitment in 1978.

Since then played solo trombone for many years including a memorable hat trick at the Reading contest and concert at St David’s Hall. In the 90’s moved to bass trombone and then finally to Bb bass when Rick Bendle retired in the 00’s and we had 4 trombones.

With the band I have had the honour of being chairman for many years and also treasurer.

Outside of band, married to Jane and  we live in Blunsdon. I and am a self employed IT consultant after working for Rover/BMW for 26 years, and, more surprisingly, a part time coach driver for Aldbournes Barnes Coaches  (thank you Li!). 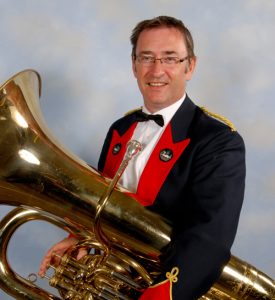 James joined Aldbourne Junior Band in the 1970s and started on the trombone and eventually ended up on an Bb Bass. He believes that the instrument finds you rather than you choosing the instrument!

The Sheppard family have close connections with the Band – his great grandfather conducted it and both grand parents were presidents of the Band. His father also played in it for many years and is now Chairman of The Friends of Aldbourne Band

Brass Banding brings people from all over the world together and whilst in New Zealand James played for the Waikato Times Hamilton Brass Band. James is Vice Chair of Wiltshire Council which keeps him busy all over the county.