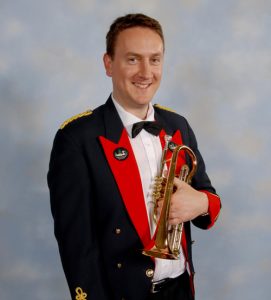 Richard Hughes joined Aldbourne Band back in 1991 on second cornet. A big step up at the tender age of 14 from fourth section Ramsbury Band

His first contest with the band was at Reading Contest at the Hexagon where the Band won on “Year of the Dragon” with Dave Whitson. Since then Richard has spent time navigating the cornet section, with stints on Second Cornet, Repiano, Soprano, Front Row and Principal Cornet where he currently plays.

Shaun has returned to his roots with the Aldbourne Band. Shaun was with the band as a junior until leaving for University in 1986. As well as 13 years in retirement, Shaun played with the John Laing (Hendon), Swindon Pegasus, Brunel and Sun Life Bands 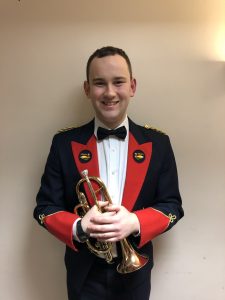 Matt first picked up the cornet aged 9 and quickly joined the ranks at the North Powys Youth Music Trust. He progressed through the set up of Brass Blowers, Training Band and ‘A’ Band before the conductor Steve Edwards asked him to join Newtown Silver Band. It was here that Matt got his first taste for competing in the Welsh Regional Second Section Championships. During his time at the band Matt auditioned and gained a place in the National Youth Brass Band of Wales in 2012 and 2013 under the tutelage of Dr Nicholas Childs and Dr Stephen Cobb.

In 2015 Matt joined the British Army as a musician and worked with Andrew Mitchell at the Royal Military School of Music. He has since been posted to the Band of the Royal Corps of Signals and the British Army Band Tidworth, both brass bands within the Army. This has seen him travelling all over the world to play in countries such as The Netherlands, Germany, Cyprus, Jordan, Gibraltar, Egypt and Afghanistan.

In 2019 Matt enjoyed a stint with Hammonds Band in Huddersfield competing in the Yorkshire Regional Championship Section Contest, and the inaugural Brass Pass Band of the Year contest. Matt left Hammonds upon posting to Tidworth in summer of the same year and joined Aldbourne Band. It was a fantastic start to life in the band for Matt competing at the British Open at Symphony Hall and the National Finals at the Albert Hall in the space of 2 months. He is looking forward to helping the band to further improve on their successes of 2019. See you all in the Blue Boar! 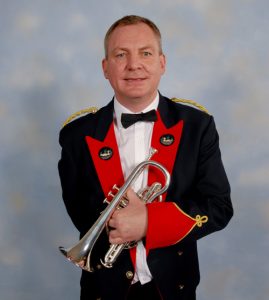 Pete started playing at the age of 12 in 1972 for his local junior band in the peak district in Tintwistle. He rapidly moved up the cornet section and at the age of 16 played soprano, he then moved to repiano where he played till he graduated from university in 1980.

With a degree in Maths and Physics he made the trek south for work where he work at Aldermaston and soon joined the local band Tadley, where end up playing principle cornet, it was there that Pete first came across Aldbourne as most ..well in fact every time they played against them in competition Aldbourne came out on top so finally he decided to join in 1997 and has been there ever since apart from a short break for work reasons in 2005. He has also played for Thornbury, Sandhurst and Kidlington. 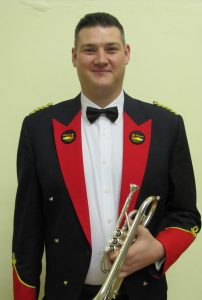 At the age of 13 Scott begrudgingly started learning the Cornet in order to save his father from finding a babysitter on band practise nights. It was from these humble beginnings that Scott’s passion for the instrument evolved. In 2013 he joined The Aldbourne Band, enabling him to fulfil many of his banding aspirations. Notable appearances include competing at the National finals at the Royal Albert Hall, and the prestigious British Open at Birmingham’s Symphony Hall. Scott looks forward to more banding milestones and hopes to compete in the ‘Brass in Concert’ contest and become West Of England champions in the near future. 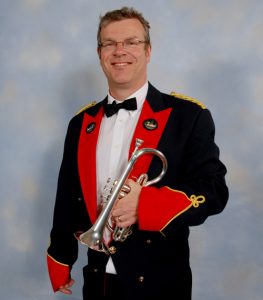 After a chance blow of a Bb Cornet in a music rehearsal at his parent’s home, Paul was encouraged to take up the instrument; starting at the age of 12 with his local brass band Helston Town in Cornwall. Within months of beginning on Bb Cornet, the junior band’s MD David Pascoe recognised his talent for the upper range and introduced him to the Soprano Cornet where he has remained ever since; making his contest debut with Helston in the 3rd Section at the Pontins Finals 2 years later. After 4 happy years under Edward Ashton, he moved to Redruth Town under Leonard Adams to play alongside friends made in the Cornwall Youth Brass Band, where Paul under the directorship of Albert Chappell had the opportunity to play at the Royal Albert Hall and Royal Festival Hall as part of the National Festival of Music for Youth. Leaving Redruth After 2 years he moved ‘north’ for employment, settling in the Oxford Area; playing firstly with Swindon Brass and then Aldbourne. Following a change in career he moved back to Cornwall and was invited to join Camborne Town; enjoying 3 successful years under Steve Sykes and Derek Greenwood. Changing employment once again Paul moved to Aldershot in Hampshire; a 10-year period that initially rekindled playing with Aldbourne for a short spell before transferring to the more local Alder Valley Brass in Aldershot and then Friary Guildford. A brief move to Lincolnshire saw Paul join Foss Dyke Band before returning to Oxfordshire in 2005 and the recently vacated soprano chair at Aldbourne, where he has remained to date; playing in some of the most enjoyable, high calibre and successful music performances of his career. 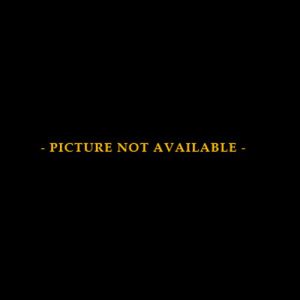 Kayleigh started playing at the age of seven with St Dennis Band. She held the principal cornet position in their Senior and Youth Bands, leading them both to many contest wins; the latest being the National 2nd Section Final. Having won many ‘Best Soloist/Player’ prizes with St Dennis, she has also had many solo contest successes. Kayleigh was also principal cornet of Cornwall Youth Brass Band and a member of The National Youth Brass Band of Great Britain. In March 2006 she joined Camborne Town Band as Principal Cornet at the age of 16. After several successful years at Camborne, Kayleigh joined Roche Brass as Principal Cornet in 2012. Kayleigh enjoyed her time with Roche Brass but wanted to take an experience within her banding career to play for one of the top 10 bands in the country. She joined the Flowers band in 2019 as Assistant Principal Cornet where she enjoyed playing at a large nunber of top brass band competitions. Kayleigh joined Aldbourne in July 2021 and is really looking forward to being part of such a great organisation. 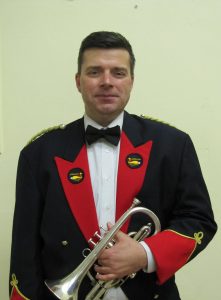 Richard began his banding career in the North West with the Poynton youth band, rising into the senior band and 1st section banding. From there he had an 8 year stint under he guidance of John Maines and Alan Lawton with BT band and got his first taste of Championship section banding playing in the Grand Shield, Masters winning the 1st section national finals in 1992 and playing in the British Open on 2 occasions. His move down south lead to successful tenures with St Sebastian’s Wokingham, and Sandhurst Silver before moving to Aldbourne band and a return to top section banding. Re-qualifying for the British Open with Aldbourne brings things round full circle and he looks forward to competing at the top level once more 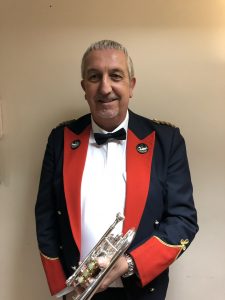 Carl hails from Skipton in North Yorkshire, but has lived in the South of England since graduating from University in 1986.

After a short spell with Newbury Town Band, Carl joined the Aldbourne Band in March 1988, which was the start of a long (20year) and enjoyable association with the band. During this period, Carl enjoyed 11 years as the band’s Principle Cornet player featuring as a soloist at most concerts.

There were also many highlights on the Contest stage, with memorable performances of high profile Test Pieces such as “English Heritage”, “Blitz”, “Jazz”, “Journey into Freedom” and in particular a stunning performance of “Harmony Music”, performed in extreme heat at Weston Super Mare.It was also during this time that Carl met and married Clare who joined the band on flugel and later Tenor Horn. The wedding was at St Michael’s church in Aldbourne with the band providing the music !In May 2008, Carl (and Clare!) was asked by Musical Director at the time Philip Harper to join the Flowers Band in Gloucester and went on to enjoy 11 and a half terrific years with the band, winning 8 West of England Titles, 6 Butlins Championships and 2 French Opens amongst others. There were also fine performances at Symphony Hall, Birmingham and the Royal Albert Hall along with many exciting concert performances.Following a break from “banding” over the summer of 2019, Carl was asked to return to Aldbourne Band, at what is a very exciting time. He is looking forward to the challenge ahead, making new acquaintances, and renewing some old ones !When not in the bandroom, Carl works as “Head of Innovation” for a company making flavourings for the Food Industry. 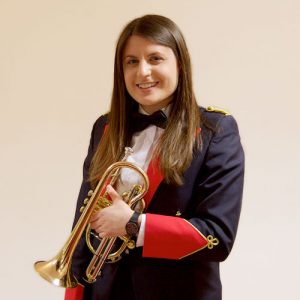 Coming from a family of brass banders, Ali first started cornet lessons aged 7, and soon joined Swindon Pegasus’ beginner band.
As a teenager she played in a number of wind bands; regularly attended Wessex Youth Band Summer Schools, playing under the direction of conductors like Derek Broadbent, Stan Lippeatt and Mike Fowles, before rejoining a brass band whilst at university. After enjoying 3 years on flugel with Cambridge University Brass Band, she moved back to Swindon and joined Aldbourne on back row in 2009. Somehow juggling band commitments with her job as a Geography teacher, highlights of her time with Aldbourne include winning the National 1st Section Finals in 2011, being Championship Section National Finalists in 2016 and qualifying for the British Open in 2018. 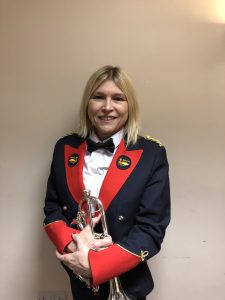 Jane  heralds from Dorset and started playing cornet aged 8 with Beaminster Brass and Crewkerne Concert Band ( now Phoenix Brass). She spent her formative years playing mostly trumpet through School and County Orchestras, but Brass Banding formed the core of her love of Brass Playing.  She has moved around with her job in I.T. and this has brought her into contact with many different Bands across the South playing bumper up and front row Backrow and Repiano, including,  Phoenix Brass Lydney Band, Thornbury Band, Bendix Kingswood . On moving to Swindon she played for Swindon Pegasus prior to taking a break from banding whilst she focussed on bringing up her two boys and work. She returned to Banding in 2012 and  joined Aldbourne cornet section in 2015 and has not looked back ! Emphasizing the family music making in the Band she is married to Andrew Tilley the Solo Baritone player in Aldbourne .