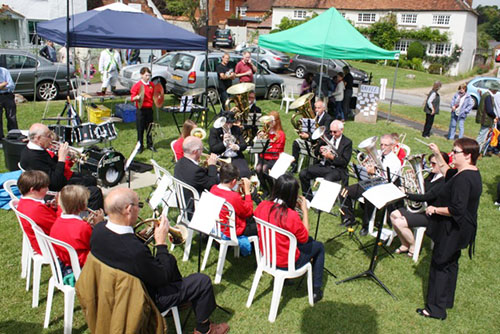 Aldbourne Training Band stepped into the shoes of its parent band last Saturday and played to a well-attended fete run by the churches together. It was held on the village green and the rain held off. Several ‘older’ members of the Training Band joined in to help the youngsters along – one of who is the President of Aldbourne Band – Harry Sheppard. He has been connected with the Band since it started up again after WWII when he was about 13 years old.

Conductor Janet Roe led the youngsters through a range of livel

y and entertaining music including
the theme from James Bond. The next Pond concert is on Sunday 6th No charge is made for these entertaining events, but a donations bucket is passed to help fund the band performances. Sponsorship is currently being sort to help this Band, formed 154 years ago, 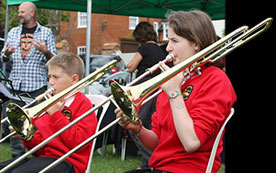 maintain its Championship Section Status. The Band are also looking for an administrator who would be willing to give some time to help the Band maintain its position as one of the top 40 brass bands in the world. If you are interested please contact Band Trustee Alan Watson on 01672 540580. 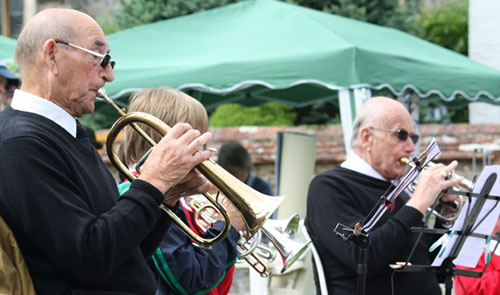 The Band are currently looking forward to performing in a new concert at 7.30pm on Saturday September in Swindon at the Steam Museum. Guest performers are the Salisbury Plain 20th Military Wives Choir. The Concert is to help raise funds for Help for Heroes.