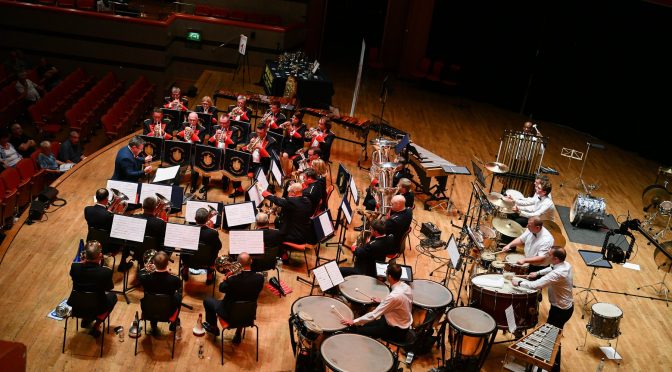 The Aldbourne Band is now hard at work preparing for Wychavon Contest<https://www.festivalofbrass.co.uk/home.html> plus a series of concerts through Autumn, after a busy summer season which culminated in our inaugural appearance at the British Open.
The first outing is our upcoming “Night at the Movies” concert on the 28th Of October in St Michael’s Church, Aldbourne at 6pm. The Band is really excited to be playing out a completely new challenging programme based around some great Movie Tunes that includes; Star Wars, Concerto for Motorcycle and Orchestra from Indiana Jones and the Last Crusade, and E.T. to name but a few. This is being jointly conducted by Glyn Williams and Chris King
Less than a week later we’ll be heading to the Wychavon Contest. Aldbourne has not taken part in an Entertainment Contest for some years, and are very pleased to announce that Chris King will be leading us for this Contest with an exciting and diverse programme of music. We are looking forward to stretching ourselves in a strong and experienced field.
On the 9th, 10th and 11th of November, Aldbourne Band will be busy supporting the Commemoration of the 100th Anniversary of the end of WW1. On the 9th we’ll be in Aldbourne playing at a concert as part of the village’s celebrations. On the 10th we have a Festival of Commemoration Concert at Christ Church, Swindon in aid of the RBL. On the 11th we proudly take our place as part of the village’s Remembrance Service. Also our Youth Band is taking an active part in the celebrations, On the evening of November 11th, at Christ Church Swindon, the Aldbourne Youth Band will be participating in “A Testament of Youth” a service of commemoration of those killed during WW1. It means an awful lot to the Band to be part of these commemoration celebrations. There are serving and ex-serving members of the Armed Forces in the Band, and we wish to respect the Aldbourne Villagers and surrounding area of Swindon who served in the WW1 and WW2 conflicts, many never to return.
After these concerts we will be focusing on our run up to Christmas, which we will soon update you about!
#Aldbourneband #Dabchicks