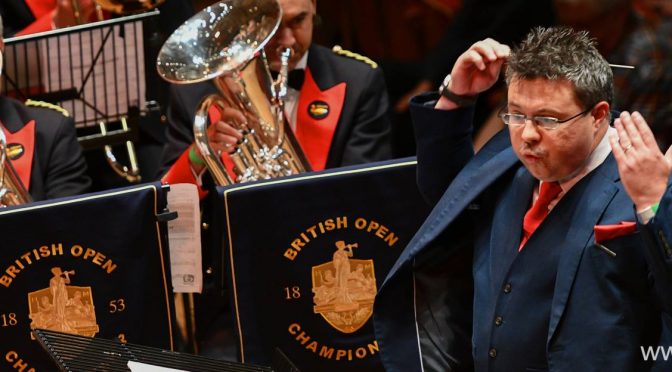 The Aldbourne Band made their debut appearance at the 166th Annual British Open Brass Band Championships held at The Birmingham Symphony Hall on Saturday 8th September. It was the first time the band had qualified for the world’s oldest brass band competition in the band’s 158 year history. We were competing against some of the world’s most famous brass band names such as The Brighouse and Rastrick Band (famed for the Floral Dance with Terry Wogan) the Grimethorpe Colliery Band (Brassed Off) and The Black Dyke Mills Band, along with 2017 winners Valaisia Brass Band (Switzerland) and European Champions Eikanger-Bjørsvik from Norway. Drawn to play number 6 out of 19 competing bands we were placed a credible 13th place with champion band of Wales, the Cory Band, winning back the trophy from Valaisia and Brighouse and Rastrick taking 3rd place.

The band delivered a stunning performance on stage after an exciting final week of rehearsals just one week after playing at the Aldbourne carnival events. The audience, including many of our travelling supporters, gave the band an enthusiastic response and the assembled brass band press provided some encouraging comments;

“Not everyone who questioned after the Grand Shield whether Aldbourne were an Open standard band would have heard that today. Their loss.”

Commenting after their performance of “A Brussels Requiem” by Belgian composer Bert Appermont Aldbourne’s conductor Dr David Thornton said “All the hard work over the previous weeks came to fruition. The band put on a stonking  performance without a shred of nerves. It felt really controlled and players took the risks I asked them to take”.

This will have surprised a few people without a doubt. A very creditable Open debut from Aldbourne.

Committed playing and clear headed direction from the middle.”

Appermont wrote his composition following the attacks in Brussels on March 22, 2016 which created a shockwave throughout Belgium and the rest of the world. Equally, the attacks in Paris and Nice led to great public indignation, fear and disbelief. Bert Appermont’s intention was to voice certain emotions that these acts of terror have caused: particularly fear, grief, anger, and helplessness. He uses the French children’s song Au Clair de la Lune as a connecting thread throughout the work.

Chairman Ian Keene added ”Our performance and placing today has given the band the confidence to go back to Birmingham next year and give ourselves the chance to qualify for a third year and continue to compete against the elite of British and European brass bands. I am very proud for the players, our band and for all of our followers who support us throughout the year. I would like to say congratulations to the Cory Band and to Glyn Williams their Principle Euphonium Player on their terrific winning performance. And of course the committee and players would like to send our sincere thanks to both David Thornton and Glyn Williams for their continued hard work with the band and for the leadership they provide.”

The band would also like to thank the many people who have messaged us and reached out to us across social media to wish the band good luck and congratulate us on our creditable performance and contest placing.

The Band will be performing next on Sunday 28th October at St Michael’s Church, Aldbourne @ 6pm with A Night at the Movies themed concert featuring music from ET, The Godfather and a number of block buster film themes from composer John Williams. The band will be joined by local pianist Joanne Taylor.

We would like to thank everyone who attended our 4th Carnival Pond Concert yesterday evening (Sunday 2nd of September). We’ve been truly blessed with amazing weather this summer and had a fantastic crowd who came to listen to the #Aldbourneband and special guests of Sheila Harrod and the Kentwood Choir. This was the band’s final concert prior to competing in the #BritishOpen Championships at Birmingham Symphony Hall this Saturday the 8th of September, and was the culmination of a long weekend of rehearsals interspersed with leading the Aldbourne Carnival Parade. The Band is central to the fabric of the village and forms the heartbeat of the Summer Programme of events. The Band is honoured that David Thorntonis leading us for our performance at our inaugural British Open appearance and were also thrilled that he conducted us for our final Pond Concert of the 2018 series. Harry Sheppard, our President, presented David a picture of the Village, painted by talented local artist Andrea West, as a gesture of thanks for leading us to achieve qualification, and as a lasting memento of the village. The audience warmly received him and made him very welcome. We are focussed for our last week of intensive rehearsals prior to Saturday. You are most welcome to come along and listen to the Open test piece, Brussels Requiem, at our Open Rehearsal on Thursday 6th September in St Michaels Church Aldbourne at 8pm. #Aldbourneband #Dabchicks