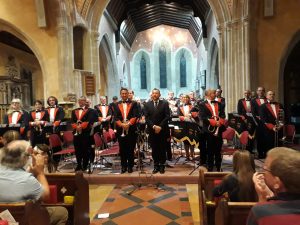 The final concert in the 2017 Aldbourne Band’s Pond Concert season had to be held in the Parish church due to the poor weather. It followed a church service to celebrate Aldbourne’s community life and to mark the end of Carnival week. As the band is an integral part of the village they accompanied the service, having also taken part in the previous day’s carnival, as they have traditionally done over many years.

The concert started with a drum roll at which the audience was upstanding expecting the band to play the National Anthem. Instead the band launched into a lively version of the Muppets theme which caused great hilarity. 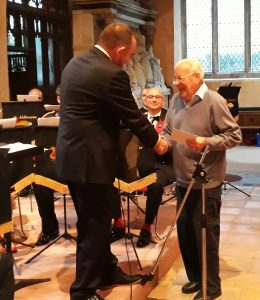 The evening included a presentation to the band’s librarian, Alan Watson, who is stepping down from that particular role after 13 years’ service but still continuing to do much for the band, particularly in his role as Youth Band Administrator. David Johnson reminded the audience of how necessary and valued a librarian is to a successful band and thanked Alan for his tremendous contribution over the years.

The band’s next performance will be on Sunday October 22nd at 6pm in St. Michael’s Church again, when they will be presenting an end of course concert. From the Friday evening throughout the weekend 10 conductors, with a range of band experience, will have been working with the band under the expert guidance and tuition of MD David Johnson on what will be the band’s fourth Conducting Course.

This will be a wonderful evening with each conductor having the opportunity to take the band through a piece they have been working on. The music will be varied and the evening will have a celebratory feel as it will be the culmination of a good few hours hard work over the W/E from the candidates and also David and the band.