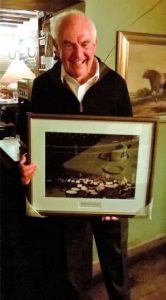 At a recent post-concert celebration Aldbourne musical director, David Johnson, shared some words of appreciation of the long service of 2nd Baritone player, Lionel Barnes, in recognition of his amazing 61 years in the band.

‘Li’ had started playing with Aldbourne at the age of 9 in 1956 being the third generation of his family to play with the village band, and his first contest experience the following year resulted in a win. In a speech prior to a presentation David said of Lionel: “What an achievement! What a legend! ‘Li’ is the epitome of a good bandsman, always on time, always smartly turned out; always one to help moving the gear, always turns up with the goods!”

As band chairman, James Sheppard presented Lionel with a photo of the band’s recent Royal Albert Hall appearance, signed by all the members, Lionel remembered that when he’d started as a youngster James’ grandfather had been in the band. Over the years his duties have often included driving the band coach as he has also been in the family coach business all his life. He was also presented with a celebratory cake decorated with the band’s Dabchick logo.

Band MD, David said: “Lionel hasn’t stopped playing but has stepped down from contesting or “international duties”, however he’ll still be turning out for “his club!”’