As the festive season fast approaches, why not purchase a copy of the Bands Christmas CD – “100% Christmas” for a friend or loved one. A great CD to have on as you unwrap your pressies or as during Christmas dinner.

Click on the Shop link to start your purchase 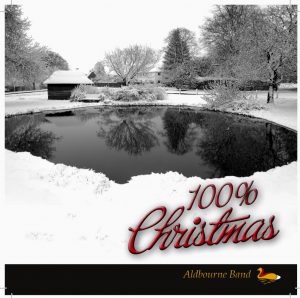 At the National Finals in October, we had two father and son combinations – Lionel and Luke Barnes, along with Shaun and Harry Mundy. Lionel has been a long serving member of the band and shares his recollections from 1961 when more family connections were represented within the band …. Lionel has entitled his memories “OF DISTANT MEMORIES BEYOND THE SHINING RIVER”.

The year was 1961 and we were a Second Section band, which was the section below the Championship Section as there was no First Section in those days. As an article in one of the banding magazines of the time said, we were “a great deal of raw material” when the conductor Robert Barnes had taken over a few years earlier. As you will see later, most of us seemed to be related to others in the Band. There were about 10 village boys, and I was one of the youngest and remember we used to get together on Sunday afternoons in my Grandparents’ house, where Luke now lives, to have a bit of practice.

We went to the Area Contest at the Colston Hall in Bristol and finished 2nd to Cheltenham Spa Band, and so qualified for the finals which were held at Kensington Town Hall, just down the road from the Royal Albert Hall, on the same day as the Championship and other sections.

Our base in those days was the Church Room in the Butts, now a private house, but I remember the Sunday before the finals we had an extra practice – this in itself an event – and felt we needed a larger hall, so it was held in the Memorial Hall. This practice did not go well and there were some in the Band who felt we should withdraw – a lot of miserable old blighters in the Band then! Anyway, those of us who wanted to go must have had our way because the following Saturday we left Aldbourne very early (already in uniform) in two of our 29-seater coaches, one pretty modern and the other pretty ancient, and headed for London driven by Bob Barnes, our conductor, and Cyril Barrett, our E flat bass player.

No Hilton Hotel, Kensington for us. No M4 either. No percussion, and no women in the Band!

The breakfast stop was a transport café in Slough, famed for its very healthy breakfasts! We practised at a church hall in Brentford, then on we went to Kensington. The test piece was a selection from Beethoven’s Eroica arranged by W. Rimmer, and the adjudicators were Eric Ball and Lt.Col. Harris. We drew 17, and we must have played well as we came 2nd out of 23 bands, including Jaguar, Cwamman and Whitburn, and were beaten by Cammel Laird Shipyard Band (who drew 20) from Birkenhead, conducted by Rex Mortimer.

We had tickets for the massed band gala concert in the Albert Hall that evening, but Paul Jerram and I gave this a miss and headed for Soho. We obviously, mistakenly, thought the test piece was “Erotica” and were just looking for that belated inspiration to lift the music from the page….

I have already mentioned that most were related, so here are some facts:-

There were six fathers and sons:-

There were four sets of brothers:-

As if that was not enough, the Palmers’ cousin Bert Palmer was playing, the Bendles and Eric Barrett were cousins to the Barnes, and Pete West (current librarian) was married to Eric Barrett’s daughter. So, as far as I can make out, the only players in the Band that day without a relative in it were:-

Ian Comley (the old boy who still comes to our practices)
Don Keene (The father of our Eb bass player Ian, and Shining River conductor)
Tony Beattie (whose son owns West Street Motors and who comes to our concerts)
David Wootton (one of the few intelligent ones)
Harry Sheppard (Principal Cornet and the father of James, our current chairman)
Malcolm (Froggy) Wheeler (who went on to become a surgeon)
Fred (Luke) Alder (B flat bass player who is the one in the overcoat in the picture and who had a habit of growling in practice, which mystified us young lads, causing us to stare at him and then him telling us where to go in no uncertain manner)
Arthur Palmer (Graham’s Dad and solo euphonium)
William Marsh (solo horn and a bit of an astronomer – see Ian Keene for details!)

I think I have got this right, but the mathematical among you may realise this comes to 26 players + conductor, so which one did not play or did we play one too many? Think it was Arthur Waite’s son, Graham, who did not play but not really sure.

We were a strange mix of country bumpkins, especially the schoolboys, a few really intelligent people, and some ancient old-timers, although they were probably younger than I am now, but what a great day it was for the Band.

The picture was taken outside Kensington Town Hall after we had played, although some are missing, probably already in the bar, and some swapped instruments for the picture. 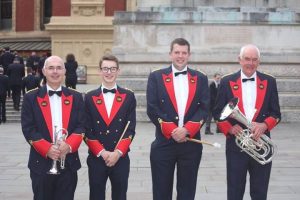 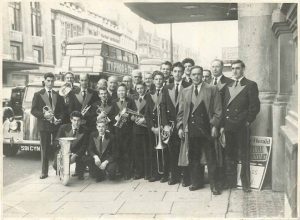