At their Christmas concert in St Michael’s Church on December 14th Aldbourne Band announced the appointment of a new Musical Director, Josh Ruck, following the recent resignation of David Johnson. 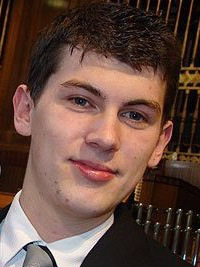 Josh hails from the Forest of Dean and started playing
the cornet at 11. His father was the conductor of the local band and eventually Josh stood in for his father on odd occasions and soon discovered a passion for conducting brass bands. His first appointment was with the Seven Tunnel Band and immediately took them to the National Championships in the fourth section. He has also had a stint with Tongwynlais Temperance an
d AW Parker Bands while completing his music degree at Cardiff University. Now, still only 22, he has the great opportunity to direct a Championship Section Band.

Band Chairman James Sheppard said “The Band are enjoying playing under Josh and we are looking forward to working with him. We hope he will take the Band on to greater success over the next few years and we wish him the best of luck.”

The home town supporters of the Band had their first chance to see Josh in action at the Christmas concert where St Michael’s School Choir and The Aldbourne Training Band, and for the first time, the new Beginners’ Band, all contributed. The audience crammed the church with standing room only to hear a seasonal programme of many favourite pieces for the time of year and would not let the Band go until they heard an encore.