2013 has seen Aldbourne Band commemorate its 153-year history with a lottery sponsored ‘Heritage Project’, collating stories, photographs, programmes and other memories of the band to document its illustrious history. As a finale, the band is holding a ‘Heritage Concert’ on Saturday 28th September in Holy Cross Church, Ramsbury starting at 7.30pm. 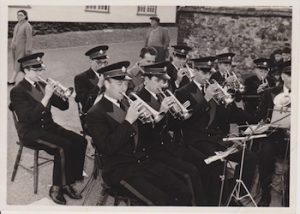 The concert will celebrate the longevity and heritage of the brass band movement, and the fantastic music that has been produced and performed over the years. Highlights will include ‘Labour and Love’, the first ever test piece specifically composed for brass band; Eric Ball’s ‘Resurgam’ and Philip Sparke’s ‘Year of the Dragon’. It will also feature movements from ‘A Moorside Suite’, Peter Parkes’ ‘Pageantry’ and ‘An Epic Symphony’, plus solos from our principle cornet player Richard Hughes and our conductor David Johnson!

Tickets are £10 and include a complementary glass of wine in the interval. They can be purchased from Aldbourne Post Office and Stores, Ramsbury Post Office, Alan Watson (01672 540680) and on the door.