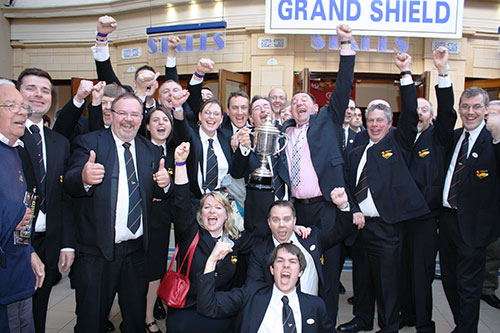 At the prestigious Grand Shield contest at the British Open Spring Festival on 8th May in Blackpool they were placed 3rd. They beat every other West Country band. They also were placed higher than 16 bands from around the country who are above them in the world rankings. The Band has gone from the third tier at the Festival to an award winning position in the top tier in just three years. This is a tremendous banding achievement, all under the baton of MD Dave Johnson. The test piece was Red Priest by Philip Wilby.

“We knew we played well, but to come third here shows just how far we have developed in the last few years,” said Chairman James Sheppard. “We are now a confident contesting band, and even though we just missed out on an invitation to the Open at Symphony Hall Birmingham in September, we are still delighted by the result and will be working hard to achieve that next step.”

The adjudicators Frank Renton ( fresh from Radio 2 Breakfast show with Chris Evans) and Allan Ramsay were unanimous in their praise for the performance which they said was ‘confident, purposeful and with a tight ensemble and control throughout’.
The Band start the series of summer Pond Concerts in Aldbourne on Sunday 2nd June at 7.15 by the village pond. Open to all, bring chairs and a picnic. If it is wet it will be in St Michaels church on the Green.